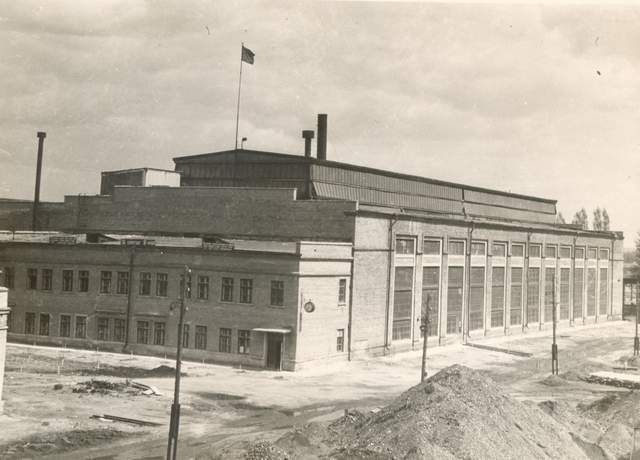 On 23 of April 1941 due to completion of an Automotive equipment maintenance plant it has become an independent enterprise with a standalone budget within a Yuzhstroymekhanizaciya bureau of the People's comissariat of construction.

In September 1943 after the city of Slavyansk was liberated the facilities of the plant were recovered, and in 1945 the plant has reached the pre-war productiivity.

In 1948 the construction of a machine-assembly shop was started. In 1952 a fabrication shop was built, in 1955 - a steel-casting department.

The plant participated in international exhibitions and fairs in Yugoslavia, Syria, France, Germany, Tanzania, Spain, Austria. Egypt, Iraq etc. For the high quality the plant received numerous diplomas and commendations. In 1976 on the International fair in Zagreb the SB-93 concrete mixer has received a gold medal. In 1993 in Madrid - the Arch fo Europe Gold Star award, in 1995 - first prize for the best trading image.

In 1986 the export has grown 9 times compared with 1964. Now our products were exported to more than 50 countries.

The product range was constantly being renewed. Instead of outmoded concrete mixers S-773, S-951, SB-93, S-302 the production of more efficient models (winter and summer versions) with an output of 40 m.cub./hr was started. The product range also included automatic cement bulk storages 28, 32 and 75 tons, mobile concrete-mixing plants for road, airfield and waterside structure construction with an output of 120 m.cub/hr. Two concrete-mixing plants were used when creating a shelter for the Chernobyl nuclear power plant.

The PrJSC Betonmash kept producing concrete-mixing equipment. These were concrete-mixing plants 15-135 m.cub/hr (with optional computerized control system), among which the SB-145 model was the most popular. It had an output 40-60 m.cub/hr and a tensometric weighing system, a compulsory mixer (output 350-1500 ltrs. of ready concrete) or a gravitational mixer (50-3000 ltrs. of ready concrete), units for dry concrete mixes, cement packing machines, cement bulk storages, weighing batchers and other equipment.

Now together with the concrete-mixing equipment PrJSC Betonmash manufactures equipment and spare parts for metallurgical and mining industry, as well as cable-laying machines for coal combines.

We will contact you within 45 minutes during working hours